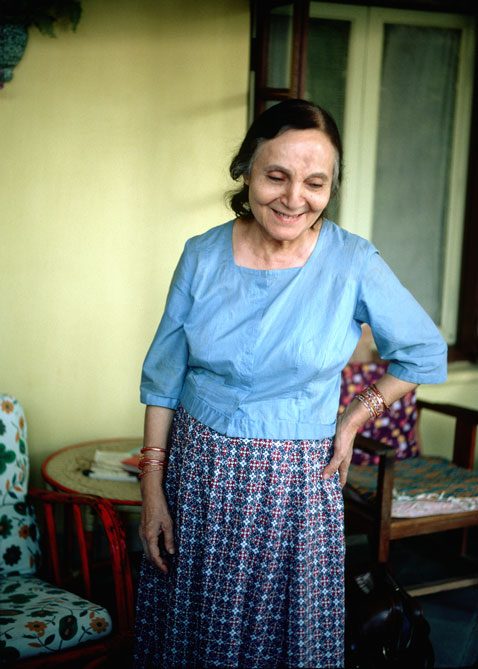 Mehera, in her familiar gentle pose, standing on her porch at Meherazad.

“Mehera loves Me as I should be loved," said Meher Baba of his closest disciple, Mehera J. Irani. From her first glimpse of him in 1922 when she was only fifteen, Mehera was deeply drawn to “Merwanji”, as Baba was then called. So was her mother, and their desire to serve him was answered when, two years later, Baba called them to form his first women’s ashram at Meherabad. It was not long afterwards that Mehera’s special place among the women disciples became apparent. As Baba’s sister Mani wrote, “As Sita was for Ram, Radha for Krishna, Mary for Jesus, for this Advent of Meher Baba, it is Mehera who plays the leading role. This role, of being the chosen counterpart to the God-Man, amounts to the highest, purest, most spiritual relationship, consisting of a divine love which the world cannot imagine.”

From those early, cloistered years at Meherabad and other bases from which Baba worked, through the New Life of wandering in the late 1940s and early 50s, on visits to the USA and Europe, and on through his last years at Meherazad, Mehera shared each phase of Baba’s life as his most beloved disciple. She was his personal attendant among the women, and lived a life of purity and seclusion, having no contact with men other than him.

After Baba passed away in 1969, Mehera overcame her great grief to lovingly greet visitors to Meherazad and share stories of her life with Baba. Her deep absorption in her beloved made a strong impression on those who met her, all the more because as a person she was so natural. She had a childlike openness, an empathy with and keen interest in Baba’s followers, a gentle humor and sense of fun, plus a great love for flowers, animals and all natural things, all of which endeared her to people. She passed away twenty years after Baba in 1989. Mehera continues to be held in the highest esteem by Meher Baba’s disciples, both for her matchless remembrance of him and for her unique example of loving him as he should be loved.