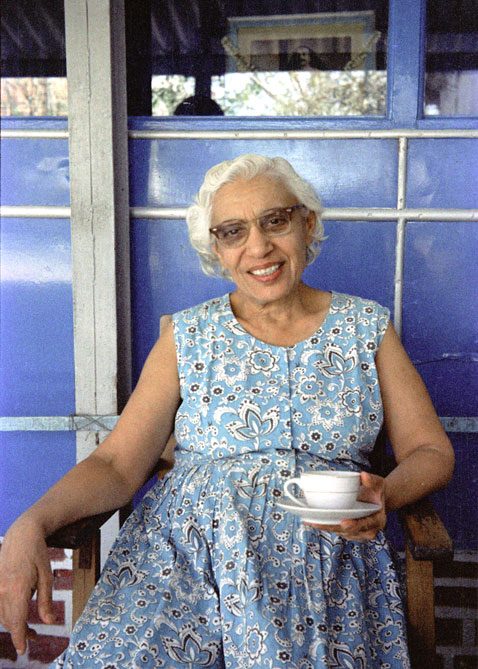 Dr. Goher stealing a brief moment from her busy routine for a cup of tea in front of the Blue Bus at Meherazad.

Also known as “Dr. Goher”, was Meher Baba’s personal physician during the last two decades of his life, as well as one of his closest women disciples. Born to Baba-followers in Quetta (then in northern India), she met Baba when she was five. Among the seven brothers and sisters, she and her sister Katie were especially drawn to him. At Baba’s request and with his financial help, she went to medical college in Bombay, becoming a doctor in 1944, one of the few women doctors in India at that time.

Three years later, when she was 31 years old, she came to stay with Baba permanently. When Baba closed his ashrams in 1949 and went on his New Life of wandering, Goher was one of the four women he took with him. She accompanied him to America in 1952, and attended to him after his first car accident there. Baba never fully recovered from a second car accident in India in 1956, and Goher worked ceaselessly to relieve his physical suffering, which only intensified until he passed away in 1969. As she says, “From the time I came to stay with Meher Baba as his doctor, I can only say that my life was helplessness in the face of his suffering.”

In the years following, Goher continued to care for Mehera, Mani and the other men and women disciples in Meherazad, and also opened a free clinic for the poor from the surrounding villages, which continues to this day. Goher’s personal attention to and care for Baba’s followers, and her encouragement to those in the medical world particularly, has affected the lives of numerous pilgrims to India.