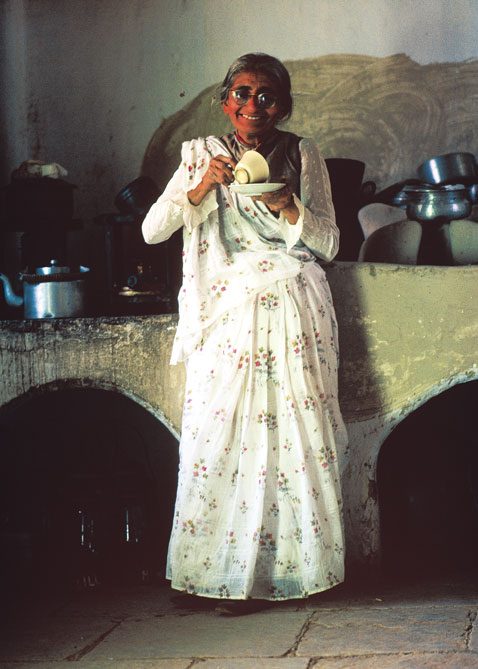 In her homey kitchen, Mansari shares tea and stories on Meherabad Hill.

Hearing of Baba from her uncle, Sohrabji in the early 1920s, young Mani Desai (Baba later changed her name to Mansari) was at first indifferent to him. Her parents however, fell under the spell of his love and became close followers. In 1927, when she first met him at the age of sixteen, Mansari too was caught in his net. Throughout her teenage years, she longed to join his ashram, and her wish came true in 1938, when Baba invited her to live with him as one of his resident women disciples. After eleven years of ashram life, both on the Blue Bus tours and at Meherabad, Mansari was one of the few allowed to remain on Meherabad Hill when Baba went away on his New Life. When he returned to Meherazad, she continued to live on the Hill, under orders not to leave except when called by him or for a few specific purposes.

In 1969, Mansari's quiet, ascetic and extremely secluded world was turned upside-down when Baba passed away and his Tomb on the Hill became a center of pilgrimage overnight. To Mansari fell the privilege of caring for the Tomb, which she did with great love and attention until her death in 1997. Pilgrims to Meherabad in the 1970s, 80s and 90s delighted in tiny Mansari's huge store of spiritual stories, jokes, wit, simplicity, chai (Indian tea), affection and generosity, which she dispensed from Baba's kitchen on the Hill.