I’ve always wanted to be a cool Baba Lover. The kind who can quote Baba at will, about any and every subject, and explain exactly what He meant. Yeah, that’s what I want to be.

And I finally got my chance! Some friends asked if they could visit tomorrow, as they want to learn what Baba had to say about a variety of subjects.

Awesome! I’ll fix a pot of tea, snacks, and really hold court. Tell them what Baba said about everything. Who knows, maybe do a little of His Universal Work? Ease his burden?

First I have to bone up on what Baba said. And it should be easy, right?  I mean how much did Baba say? He was silent after all.

“He actually said a lot.”

“Doesn’t matter. Using the publishing industry’s average of 250 words per page, Baba wrote about 750,000 words (God Speaks, Discourses, The Everything and The Nothing, etc.).”

“Add in Baba’s many public statements, such as the Universal Message, The Highest of the High, The Call, etc., his prayers, poems, songs, utterances, conversations, private orders, letters and cables, and we could reasonably calculate that Baba said about a million things.”

“‘A million things? No problem. Just have to study a little so when one of my guests asks ‘what did Baba say about this?’,  I’ll have an answer. I mean how hard can it be?”

“Well, three times harder than you think. In his 1958 Clarification and Confirmation of the Final Declaration, Baba said He speaks in three languages.”

“Okay still not a problem. I’ll just come up with three plausible interpretations of something Baba said, and pick one. Heck that’s a 33.3% chance of getting it right. Pretty good odds. This’ll be fun. Wonder what I should wear? I know, a nice Indian kurta!”

“Baba also said that in addition to the three possible interpretations of the one million words He spoke, He, as the Avatar, sometimes spoke from Infinite Knowledge and at other times from ordinary human unknowing.”

“Baba spoke from ordinary human unknowing? Like you and me?”

“Yes, in other words, as a man, Baba sometimes simply didn’t know. He wasn’t fakin’ it like a Perfect Master. He truly didn’t know.”

“Okay. So of the one million things Baba said, of which there may be three interpretations, a certain number of them may have been spoken . . . in ignorance?”

“And there’s more. Don’t forget Baba often spoke in jest (will grapes really be extinct in 700 years?), used hyperbole (is eating eggplant tantamount to committing suicide?), and metaphorically (will three quarters of the world really be destroyed?).”

“Okay, stop. Stop! This is getting too complicated. A million things? Three languages? Some spoken in ignorance? Others using poetic device? There’s not a snowball’s chance in hell I can accurately explain Baba’s words to my friends.”

“There is actually less.”

“Less than a snowball’s chance in hell? Scientifically?”

“‘No, metaphorically. Suppose you get lucky and interpret Baba’s words accurately, there is still a reasonable chance they won’t understand.”

“Doesn’t matter. Humans have a unique way of transforming what they hear into what they think they hear.”

“So regardless of my efforts, there is a good likelihood my guests will misunderstand? On their own?”

“I’m cancelling tea. Putting my kurta away. Too bad. I really wanted to be that guy. That Baba guy who can share Baba’s words at the drop of a hat . . . and explain what they meant.”

“Yeah. You just have to understand there is a good chance you’ll be wrong or misunderstood.”

“Funny you should ask. Here.” 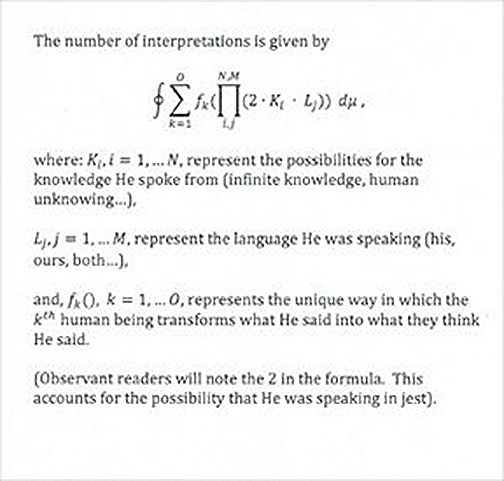 “It’s the mathematical formula showing the number of possible interpretations of any one thing Baba said.”

“Then how should I reply when asked ‘What did Baba say about this or that?’. I gotta say something. I can’t just say ‘I don’t know’ all evening. That’s not very helpful.”

“Just say what you feel about Baba.”

“Well, I think He’s beautiful and I love him.”

“Just say I think He’s beautiful and I love Him? That won’t help anyone understand Him.”

“Just say it. Baba will take it from there.”

“Okay. Okay. Okay. I’ll say it. Only because it’s late and I’m tired and I need to get to Game of Thrones. I’ll just say I think Baba’s beautiful and I love Him. But after that, I’ll be stuck with two hours of tea and small talk . . . but it is a lot easier than trying to explain everything.”

“Incorrectly. Thanks. Thanks a lot. You’ve been a big help.”

“Oh, one last thing. If I just say I think Baba’s beautiful and I love Him, what are the chances they’ll understand?”

“Hey, do you want to join us for tea tomorrow?”