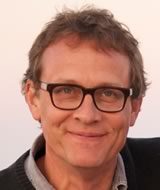 After exploring several spiritual paths Billy was simultaneously thrilled (Baba!) and relieved (no more back-wrenching Zen Meditation!) to learn of Meher Baba from the book Listen, Humanity which he stumbled on in a used bookstore over 20 years ago. Billy and his wife Pamela were manager/caretakers at Meher Mount in California for two years around the turn of the century.

Billy presently resides in Asheville, NC with his wife and children Rose and Ben and makes his living writing and performing music, mostly for films.