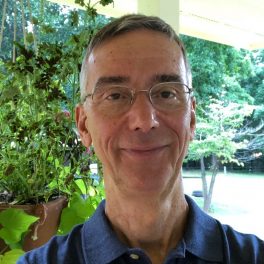 Bob became a Meher Baba lover in 1969, while studying ancient Chinese history at Harvard. He later taught elementary and high school in Milwaukee and Atlanta before deciding to become a doctor.

This latter decision, despite its rigors, turned out to be a fortunate bit of karma, for it later afforded Bob the wonderful opportunity to care for the mandali in India (and Myrtle Beach) starting in the early 1990s and to stay at Meherazad many times since then.

Bob was a member of the Meher Center board in the 1990s and, since 2004, has been a member of the board of Meher Fund, which supports the Meher Free Dispensary begun by Meher Baba's personal physician, Dr. Goher, at Meherazad.

Bob lives in Athens, Georgia, and has two wonderful daughters, Jenna and Alana.